Yes – the first swine flu conspiracy theories are hitting the Internets, providing a rare opportunity to view these numb skull paranoids as they struggle to assemble a few fragments of information into a suitably cunning plot.

Here’s how it goes:

Evidence: The flu virus is reported to combine “genetic material from pigs, birds and humans in a way researchers have not seen before.” Implication: the virus was probably deliberately released.

Evidence:  “In all U.S. cases, the victims had no contact with any pigs.” Implication: Pigs are evil… er they caught it from other people… er pigs never had anything to do with it.

Evidence: A public health official says: “This strain of swine influenza that’s been cultured in a laboratory is something that’s not been seen anywhere [before].” Implication: The poor guy wasn’t referring to standard identification techniques, but letting slip vital details of a dastardly scheme. WE TOLD YOU IT WAS DELIBERATELY RELEASED.

Evidence: The world has huge stock piles of Tamiflu. “Top globalists and Bilderberg members like George Shultz, Lodewijk J.R. de Vink and former Secretary of Defense Donald Rumsfeld” have a financial interest in Tamiflu. Implication: THEY’RE BEHIND THE ATTACK.

Evidence: The 1976 swine flu scare didn’t add up to much. Implication: RUMSFELD WAS BEHIND THAT TOO.

Now I am sure the story will become more polished as additional information is available to be distorted. But remember. This is how it started. And this is how little evidence these cretins need to start spinning their fantasies…

Update: Mike Adams, editor of Natural News, chimes in with one of the great rhetorical questions of all time:

Could world governments, spooked by the prospect of radical climate change caused by over-population of the planet, have assembled a super-secret task force to engineer and distribute a super virulent strain of influenza designed to “correct” the human population (and institute global Martial Law)?

Update II: OMYGOODGOD  the plot is really thickening… As Dan O’Huiginn points out in the comments, the spiciest nutjob theory is that swine flu was “a high tech assassination attempt on President Obama.” Robert Wenzel is one of many pushing this fantasy:

During President Obama’s recent trip to Mexico, Obama was received at Mexico’s anthropology museum in Mexico City by Felipe Solis, a distinguished archaeologist who died the following day from symptoms similar to flu…

Clearly, if the man died the next day, he was highly contagious when Obama met him, and could have infected Obama easily. That, it appears, he didn’t infect Obama could just be a matter of luck for Obama.

Some reports say Solis died of a heart attack (an obvious cover up), others that he may have been an innocent victim of the flu (what idiot would believe that?).  Wenzel knows better:

They keep Obama in a bubble. I see the way he travels around D.C. I would think it’s pretty near impossible for a gunman to get to Obama (unless it is someone already around him who has a gun– a guard losing it type thing) But sophisticated planners, who can do the hit through a third person who will have the virus and will be able to pass through security, while the real perpetrators are not even at the scene, that could only be executed by very serious players.

Keep this in mind. The population of Mexico City, where Obama was greeted by Solis, is roughly 8.8 million people. If we assume all the 1,000 reported cases of the flu in Mexico are in Mexico City, the odds of any specific person in Mexico City having the virus is .0125%. And this guy ends up greeting the President, when he is highly contagious? It’s investigation time.

Update III: Now we’ve got a witness!!! Granted we don’t even know his name, but the conspiracy case is beginning to look pretty watertight:

Guys, you’re the only ones i can tell about this. Be careful who you inform.

I’m a trucker with a stellar record, and I’ve been getting bigger and bigger transport jobs from the government over the years. The job’s been good to me, as I do not have to interact with anyone when I’m on the job, and most people stay away from me because they assume I’m dumb as a sack of bricks. I don’t mind, since I don’t like people.

Two weeks ago I finished transporting some biohazard-labeled sealed boxes to the Pentagon. After an armed escort met me at the loading dock, they told me to wait in truck until someone arrived with a check. These people weren’t the govt workers I knew and interacted with regularly, so they didn’t know that I wasn’t the average retarded truck driver. They didn’t think I had enough curiosity to wander around a bit, as I always do.

I saw the boxes from my truck opened and lying discarded in a room right by the dock. The contents were gone, but a sheet of paper with Pentagon letterhead was still lying inside. Half a page down was the heading “H1N1 phase I – probability of success by epicenter.” At the top of the list was Mexico City, followed by Los Angeles, New York, Houston, and Singapore(?). Not being retarded, I remembered enough of what I read to jar my memory when the first reports came out. Wherever you are, be careful – there are powers and interests here far more dangerous than you imagine.

Update IV: Via Twitter, Mark Borkowski tunes in. ‘Who?’ you ask. Mark Borkowski. A man whose ‘face is known to millions’, who TV producers turn to whenever they need ‘authoritative comment on scandals, celebrity and the media itself’, and the guy who Eddie Izzard, Graham Norton, Joan Rivers, Macaulay Culkin, Sir Cliff Richard, Shirley Bassey, and the Bolshoi Ballet rely on to protect their various reputations.

Borkowski (who I met once, and is a thoroughly nice guy) is working on “a hunch that the swine flu panic iis [sic] stirred up by a US PR company to help the development and manufacture of a dodgy vaccine.” And yes, he’s deadly serious. When questioned, he reveals that “some dark uber lord with a pharma account” is behind it all. Will keep you in touch as the PR legend’s investigation develops…

Update V: The mysterious trucker popped up on March 30 in a slightly different guise in a call to radio show The Power Hour. Unfortunately the caller can’t reveal where she got her information: “What I am saying has already put me in danger.” 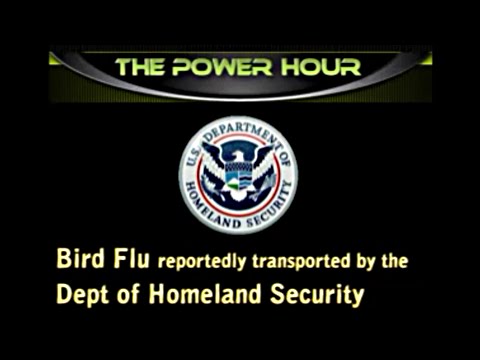 Update VI: I was naive in my initial premise that swine flu conspiracy theories were born de novo over the weekend. Of course, these memes have been incubating throughout the period in which avian flu has been in the news. The new theories also grow from old anxieties about government-sponsored vaccination programmmes. More on this later, maybe.

For now, and as a last update to this post, many of the conspiracy theorists believe that the 1918/1919 pandemic was the result of a US biowarfare programme. Why? Because the Nazis said so:

In 1948 Heinrich Mueller, the former head of the Gestapo, told his CIA Interrogator that the most devastating plague in human history was man-made.

He was referring to the influenza pandemic of 1918-1919 that infected 20% of the world’s population and killed between 60 and 100 million people. This is roughly three times as many as were killed and wounded in World War One, and is comparable to WWII losses, yet this modern plague has slipped down the memory hole.

Mueller said the flu started as a US army bacteriological warfare weapon that somehow infected US army ranks at Camp Riley KS in March 1918, and spread around the world. He says that it “got out of control” but we cannot discount the horrible possibility that the “Spanish Flu” was a deliberate elite depopulation measure, and that it could be used again. Researchers have found connections between it and the “Bird Flu.”

Update VII: OK -a few more updates. Why are only Mexicans dying? Because the ‘weaponized virus’ has been deliberately engineered to target Hispanics.

Update VIII: Now it’s settling down, the key ingredients in the conspiracy ‘theory seem to be:

Governments have motive – the New World Order is engaged in a war with humanity. An epidemic – with associated ‘dark winter’ as basic services are withdrawn – will allow globalists to make their move, creating world government etc.

Business has motive too – this is a chance to sell lots of vaccines and anti-virals. Plus businesses are also controlled by globalists and are committed to the New World Order.

Swine flu is clearly weaponized – the obvious signs are (i) an unusual mix of human, pig and bird viruses – couldn’t happen in nature; (ii) simultaneous release across multiple sites – too quick for ‘ordinary’ transmission; (iii) various scientists etc. have confirmed the virus is manmade, though they’re being hushed up; (iv) eye witnesses are desperately trying to get information out about the plot, at real danger to their lives.

Something very bad is going to happen – Four things could be going on, in ascending levels of scariness: (i) This is a ‘beta test’ – a trial balloon. (ii) This is a pretext to mass vaccinate people with a poisonous vaccine. (iii) The take over by the globalists is beginning. Prepare for a world police state; (iv) A massive cull of the population is underway (80% or so) – to create a world that’s much easier to control.

While this picture of @Jacob_Rees_Mogg eating some crisps is getting a lot of Twitter attention, nobody appears to have noted the fact that Death has appeared behind the minister as in some classic M.R. James ghost story. twitter.com/Jacob_Rees_Mog… pic.twitter.com/jElfqyTHdW

I sat down with @TheGCSP and @FinlandGeneva in #Geneva last November to talk about #multilateralism, the #UnitedNations, the #EuropeanUnion and #NATO. Here are my (slightly hoarse) nuggets of wisdom... youtube.com/watch?v=kYl8iG…