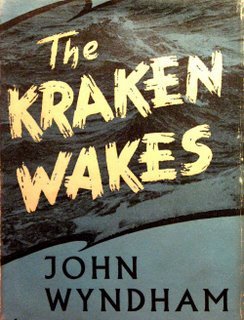 The first signs of disaster are noticed by only a few doomsayers.

Newspapers profess themselves ‘distressed by the calamities that have befallen certain islands,’ but counsel awaiting more evidence before taking hasty action.

Industry reacts with fury when government indulges in what it sees as a ‘panic inspired’ reaction.

The loss of the ice caps brings breathless media coverage. “I have seen icebergs formed before, but never on anything like the scale that is taking place there,” reports one observer.

In the great ice cliffs hundreds of feet high, cracks appear suddenly. An enormous section tilts out, falling and turning slowly. When it smashes into the water the spray rises up and up in great fountains, spreading far out all around…

Very often a berg had no time to float away before a new one had crashed down on top of it. The scale was so big that it was hard to realize.

Only by the apparent slowness of the falls and the way the splashes seemed to hang in the air – the majestic pace of it all – were we able to tell the vastness of what we were seeing.

But still there is little appetite for action. The scale of the threat may be accepted by a growing number of ’eminent but very worried men’, but the public remains sanguine. Sea level rises of two and half inches appear an anticlimax, ‘ just a very slightly higher mark on a post.’ And, after all, by the time things get really bad, won’t the ‘boffins’ have come up with a technological quick fix.

Then London’s flood defences are breached for the first time and thoughts turn to protecting those parts of Britain that can most easily be saved. The result? “Great bitterness between those who were chosen and those who looked like being thrown to the wolves.”

The second flood is worse and prompts a state of emergency (“the government had removed the velvet glove”). For a while, despite crumbling infrastructure, some kind of normality is maintained,  “seemingly through habit or momentum.” Gradually, however, lawless ‘seeps’ in.

“Failure of the emergency electricity supply one afternoon, followed by a night of darkness, gave a kind of coup de grace to order. The looting of shops, and particularly foodshops, began, and spread on a scale that defeated both the police and the military.”

From there, it is a short step to the era of mass migrations, as people make a “panicky rush to stake a claim on the high ground while there is still room there.” A fiercesome “guerrilla war between starving bands” begins.

Standard climate change-inspired, apocalyptic fiction? Sure, except for the fact that John Wyndham’s The Kraken Wakes was first published over half a century ago, in 1953.

I was reminded of Wyndam’s book reading Jules’s recent post about McCarthy’s The Road. Its age offers, I think, evidence that human fears about our impact on the climate stretch back fifty years or more.

Indeed, in our paper for the London Accord, Alex and I traced popular awareness of the possibility of climate change back to the 1930s. “Gaffers who claim that winters were harder when they were boys are quite right,” claimed Time Magazine in a 1939 feature.

But, at the same time, there was a great reluctance to believe that human action could have a truly significant impact. In 1938, one scientist working on the link between fossil fuels and climate reported that many found it ‘repugnant’ that “man’s actions could influence so vast a complex.”

What changed all that was nuclear weapons – undeniable evidence of an untrammelled human power. Maybe a vengeful God is punishing the world, as one of the characters wonders in The Kraken Wakes:

H’m. You think you’re so clever. Little gods yourselves with all your atom-splitting and microbe-conquering. You think you rule the world, and possibly heaven, too. Very well, you conceited little mites, there’s a lot more about life and nature that you don’t know. I’ll just show you one or two new things and see how your conceit stands up to them. I have had to do it before.

Wyndham’s vision is strikingly similar to Lovelock’s view of the world. Indeed, after an amusing stint holed up on the top  floor of Selfridges, his hero eventually escapes to Cornwall, which is where Lovelock has made his home and from where he writes that:

In our small country we have to act now as if we were about to be attacked by a powerful enemy….We need to be prepared to retreat from [our cities] in an orderly way as the floods advance…

We need, most of all, that change of heart and mind that comes to tribal nations when they sense real danger…Our cause will be the defence of out civilization to ward off the chaos that might otherwise overtake us.

I however prefer Lovelock’s original, more optimistic, worldview, expressed in his classic first book, published in 1979 and which I read some (OK – not that many) years later as a 16-year old.

Lovelock worried about “our ignorance of planetary control systems” – an ignorance that is still considerable, despite three decades of investment in climate science. (Most of the major knowledge deficits that remain are due, in my opinion, to our failure harmonise our understanding of natural and socioeconomic systems).

But Lovelock also recognised that “man has the novel capacity to collect, store, and process information, and then use it to manipulate the environment in a purposeful and anticipatory fashion.”

That knowledge had been focused first on the biosphere, he argued, as humans needed to know how to hunt and gather. Then the challenge of urban living had taken centre stage. And finally “the problems of human relationships” had become the core issue of the age.

Now, he speculated, a fourth era could be on the cards, as human beings start to function as a de facto collective intelligence for Gaia, responsible for making decisions with planetary implications, and for using his ‘technological inventivness and his increasingly subtle communications network…[to] vastly increase Gaia’s range of perception.’

In his old age, Lovelock’s vision has darkened considerably – partly as it has become clear that we are heading for trouble at high speed, but partly, I suspect, because old men tend to have a bleaker worldview than the young.

I think it’s still far too early to give up hope and to devote our energy to keep a few survivors alive. After all, these days, Lovelock imagines death on a massive scale with what you might call stoicism, but comes across to me as a somewhat studied insouciance.

With billions of lives at stake, I don’t think it’s time to give into the Kraken just yet…

A Blueprint for Black Lives Matter in the Development Sector

Over the past few weeks – in the wake of COVID-19 and the killing of George Floyd – we have seen development, aid, and humanitarian institutions try to respond more effectively to racism. Racism is rooted in a combination of prejudice and power, and action to combat...

The COVID-19 crisis is another timely reminder of the need for building resilience into our social, economic, and financial systems – locally, nationally, and globally. COVID-19 demonstrates the extent of globally inter-linked systems of trade and finance, and reveals...

All COVID-response pieces begin with a tumbling wave of “blah crisis blah opportunity blah uncertainty”. We don’t know enough to know enough. Just hold on until we get the facts. Competing scenarios. Duelling facts. Whatever your flavour – please assume that’s true of...